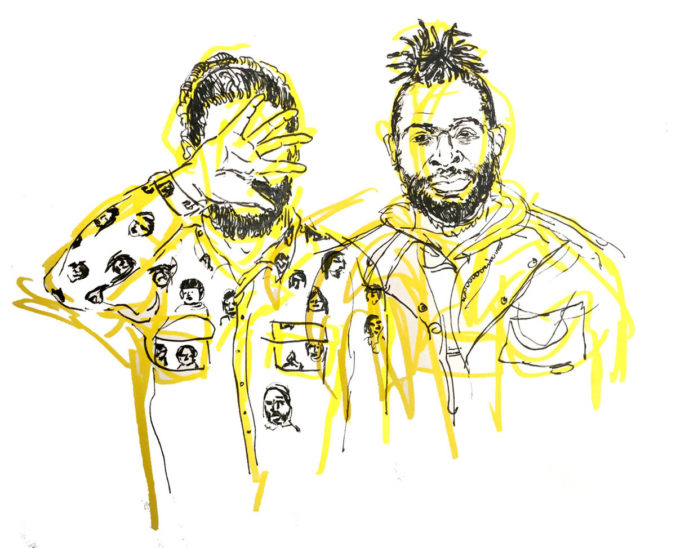 Nothing is Promised: An Interview with Billy Woods

Last month, I spoke with New York rapper Billy Woods: the Backwoodz Studioz mastermind responsible for some of the best solo hip-hop albums of the decade. Like Dour Candy (2013), like Today, I Wrote Nothing (2015), like Known Unknowns (2017). Woods is also part of the duo Armand Hammer, a group which includes rapper/producer Elucid. The two returned full force at the end of last year with their third album Rome. Then Elucid released a solo album. Then the duo released three music videos as well as a vinyl-only album Paraffin, which dropped in July. Fingers crossed for a digital version down the road. I spoke with the prolific MC about his creative process, his work space, his music rotations, and much more.

Honestly? It’s been terrible. Hopefully some good writing comes out of it because 2018 has been an unmitigated disaster thus far from the moment I opened my eyes on January 1st.

I never noticed that pattern before and that’s a good question. I have some stuff I’m excited about but currently waiting for some collaborators to clear their calendars, so it’s hard to say. And I hate stopping the middle of a project to work on a different one because I feel like each thing needs to be it’s own chamber, I get worried they will be too similar. Maybe that’s something I need to let go of, who knows.

Your solo and collaborative albums are incredibly consistent. Do you build them up slowly? Or do you create in bulk and trim down the tracks?

Thank you. That’s a complicated question to answer because every one of them was made a bit differently. History Will Absolve Me had lots of producers but also involved a lot of recording and winnowing out the best tracks. It was really about me and engineer/producer/consigliere Willie Green locking in and working in a bit of a vacuum. Dour Candy and Known Unknowns are basically one-producer records, there wasn’t a lot of extra fat to trim, because Blockhead (nor Aesop for that matter) isn’t giving me tons beats at a time and not everything I get is going to fit what I’m looking for. I do still have a couple joints that didn’t make it onto Known Unknowns though, and bizarrely all of them were collaborative songs. Today, I Wrote Nothing was the quickest album I ever made and was a project where form and concept dictated everything. I recorded most of that at ELUCID’s spot and it was intentionally a very un-fiddled with project. I wanted something visceral and unedited, I made songs as long as I felt in the moment, no longer, I rewrote nothing. As for Armand Hammer; collaboration necessitates entirely different processes.

You have one of the most unique, freeflowing voices in hip-hop. What’s your writing process like

Honestly, it really depends a lot on the project but usually I find a beat and see where it takes me. Sometimes I just down ideas or concept or just a line that I think might take me somewhere and then come back to that list if I am looking for inspiration. I sit at my desk and smoke and drink tea and write and yell at my cats.

What does the future of Backwoodz Studioz entail?

Nothing is promised. I hope we can continue to build, expand our reach, keep putting out records and artwork that I am proud of.

What’s your workspace/studio space look like? What are some studio essentials?

My workspace is a wooden desk I brought to my current hideout in a semi-abandoned building in Crown Heights, awaiting the gentrifiers wrecking ball. I first got this desk off the streets of Brooklyn in the early 2000s and it’s beyond scuffed, it’s probably fair to say “battered”. On top of that are three books: a dog-eared James Baldwin biography,  John Stockwell’s In Search of Enemies, and Homer’s Odyssey- which I have never actually read. There are haphazard piles of bills, random photos, a hard drive, a cup of tea, water, a watch Willie Green gave to me, a big thing full of pens, markers and scissors, some Harpers magazines, scraps of paper with notes on them and a notice from the gas company that I still owe them money from the old apartment. There is an ashtray with a spliff of that Uptown Haze in it. There is a small black cat looking out the window and an even smaller silver laptop. There is an Ironman CD in the case for Dizzee Rascal’s Boy In the Corner. I have no idea why it’s even out as I currently have no CD player. There is an untidy stack of more books and graphic novels and old comics all thrown together from the recent move that I should organize but haven’t. There is a document shredder and a Sunday edition of The New York Times from a week ago. There are two separate broken pairs of headphones.

If you were to empty your pockets, what would you find?

I have never had a wallet so, keys, cash, ID and bankcard, papers, loose change, some list of tasks written on a piece of paper and folded up in a back pocket a week ago.

Outside of your own music, what have you been listening to recently?

Listened to that Tierra Whack album, definitely worth it.

Do you have any advice for artists/rappers working on their craft?

I’m not really sure I am in a position to advise without knowing what the person wants to get out of it.

Check out the new Armand Hammer record, Paraffin, I think it’s an interesting project even thought it wasn’t made like your typical album.